Michael is the only angel accorded the "archangel" title in the Bible, where he is also called "one of the chief princes." The book of Daniel and Revelations describe how Michael provides protection in time of trouble. (pg. xii)

According to legend, Michael was the angel who battled Lucifer into hell when he challenged God. At times, the world forgets just how powerful Lucifer is, and of course he's powerful, that's how God created him to be. In fact, Lucifer's power is so close to that of God's that he thought and still thinks he can take God's power from him. In fact, Lucifer can give you everything God can. He can bring you money, he can bring you fame, he can bring you health, but he will come to collect one day. Hence the reason there is a spiritual warfare going on. Classic story of good versus evil, with Michael still standing at the front line with his armor (as he is depicted in most pictures) ready to fight. Since God has given me the ability to see things that sometimes I don't want to see, Michael has always been there reminding me to call on him and he will protect me in my battles. You see, Michael won't just come, unless he is ordered to by God or ask to do so by the person in trouble because of our free will.
Hearing Kelli tell Michael's tale, my body started to shake. I had a sense of peace, and a sense of fear. Deep down, I just want to be a normal girl with a normal life. I don't want to see demons or angels... I don't want to see spiritual warfare. Self doubt started to fill my body as Kelli laid her cards out again to go into my life's journey in more detail... A life that I'm starting to feel resembles an episode of "True Blood" more and more everyday. A life, I fear, will never be normal.
"You're an Indigo Child," Kelli said as to me.
"Pardon?" I asked as I looked from Kelli to Drew and back again.
"An Indigo," Kelli said again.
... To Be Continued...
*For more information about readings with Kelli or to book and appointment, please go to www.mamakelli.com
** Doreen Virtue is the author of the "Angel Therapy" books that can be purchased at your local bookstores, or by visiting her website at www.AngelTherapy.com.
"When all you have to keep is strong
Move along, move along like I know ya do
And even when your hope is gone
Move along, move along just to make it through."
-The All-American Rejects 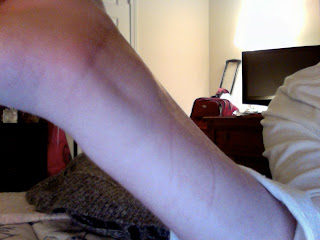